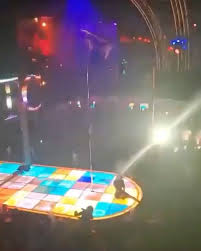 Her jaw was fractured, but perhaps the strongest pain was that of indifference, as the club refused to help her with medical expenses.

Genea Sky showed all her skill in the highest part of the pole when she lost control and fell to the ground. Despite the scream of the crowd and the painful landing, in which her face got the worst of it, she continued to dance on her knees like a professional.

With the pain in tow, Genea Sky continued to keep performing, as if nothing happened.

Far from recognizing her professionalism, in social networks they chose to make fun of her instead. Even rapper 50 Cent published the video with a laughing tone, while she was not having a good time: in addition to the jaw, she broke some teeth and suffered a calf sprain.

Because of the teasing, she posted on Twitter: “Yes, I fell off the pole. Yes, I broke my jaw. NO, I am not well and there is absolutely nothing funny about this situation. This is the worst pain I have ever felt and I would not wish it on anyone.”

The TMZ portal picked up the version of the Texas XTC Cabaret manager, Eric Langan. The man said they would not cover her medical expenses because they had not asked Genea to get on the pole. Likewise, that the routine of the employees was autonomous, and with it, the responsibility of their acrobatics. Another excuse was that the young woman is not employed full time and therefore could not get the benefits of other workers.

Because of these conditions, she had no choice but to pay out-of-pocket medical expenses. A friend created a request on GoFundMe and they raised $ 31,000, with which she was able to cancel the account.

“This is not to get your attention. This video is to update everyone and thank them for all their love and support. I am truly blessed and appreciate kind messages, ” she said in a social media post.

this sums up my first str*p club experience, i really do hope she’s ok 😭😭😭😭😭😭😭😭😭 pic.twitter.com/fA4Tu1mePL

Previous Big Brawl In The London Underground, Photo Of The Year
Next Why is “Chucky” Lozano Grateful to the Words of Doctor Garcia?