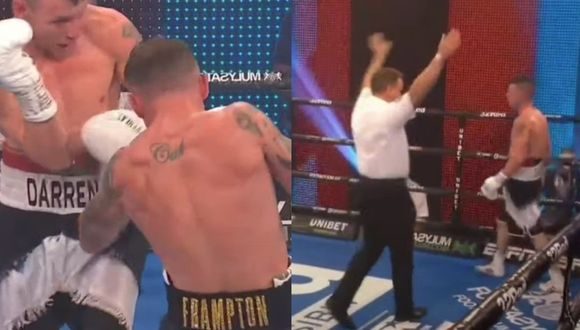 Boxer surrenders to the beating of the ‘Cobra’ Frampton (VIDEO)

This post has been brought you by  laroja-deportesonline.com/   The best online site to watch Live Soccer Matches

Darren Trainor could not against Carl Frampton and decided to stop fighting in round 7.

Carl Frampton once again demonstrated why he won the world title twice, this time by defeating Darren Traynor by technical knockout in round 7 of a boxing evening held at the ‘BT Sport’ studio in London, England; However, what most caught the attention of this evening was that the Scotsman decided to stop fighting after receiving a hook to the liver. The video of what happened went viral on YouTube and other social networks.

Frampton sent Darren Traynor to the canvas with a blow to the body late in round six, after dominating the action from start to finish. Thus in the seventh round ‘La cobra’ hit a powerful hook to the liver of his opponent, who decided not to continue.

Although it is not the first time that this has happened in the world of boxing, it did draw attention to the fact that Carl Frampton’s opponent decides to stop fighting by moving his hands. ‘No more would have said’, emulating the remembered phrase of ‘Hand of Stone’ Durán.

Traynor was not the right opponent for Frampton , in fact, he took the fight to replace Vahram Vardanyan, who was unable to reach the UK due to a visa problem.

Thus Carl Frampton added the 27th victory of his career and is heading towards a fight for the WBO junior lightweight title against reigning champion Jamel Herring. Meanwhile in the night’s co-feature, compatriot Michael Conlan defeated Sofiane Takoucht by TKO in round 10.

Because of the way Traynor decided to stop fighting, the video of his defeat went viral on YouTube and the main social networks.

Previous Video of Müller and Davies rapping goes viral after thrashing Barcelona (VIDEO)
Next Why Is Chicharito Champion Of The Europa League With Sevilla Even Though He No Longer Plays There?