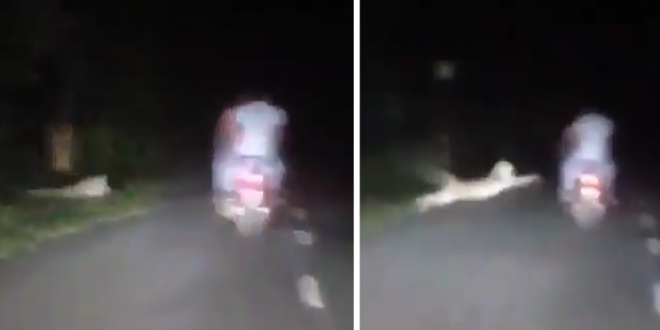 Surprising Attack Against A Motorcyclist On A Road In India (VIDEO)

A leopard was lurking among the thick vegetation that flanked a road and lunged itself at a motorcycle that passed by.

An employee of the Indian forestry service shared the video showing a leopard lunging himself against a motorcycle and its two passengers, who were saved by a few centimeters from the cat’s claws, UPI reports.

The video of the incident was tweeted by the Forest Service officer, Susanta Nanda, who commented as follows: “Everyone expected to give way to the true owner [of this area], the leopard, when a motorcyclist wanted to get his way. It was his last trip, “Nanda wrote.

Nanda said the video was filmed by a driver who had stopped to give the leopard a safe distance to cross, but that the motorcycle had advanced to other vehicles and followed the road without noticing the animal.

How could the leopard miss it🤔All were waiting to give right of way to its real owner, the leopard, when a motorcyclist wanted to have his way. Would have been his last ride. Please learn to respect the wild🙏🏼🙏🏼 pic.twitter.com/j2yZiwEx7K