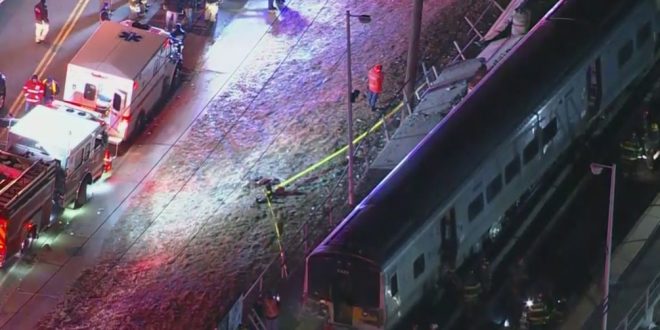 On Tuesday evening, 2 LIRR trains travelling in opposite directions collided with a vehicle near the Westbury station, Long Island, resulting in the death of three people inside the car and leaving at least 7 train passengers injured, informed the office of governor Andrew Cuomo.

As per reports by authorities, the driver of the vehicle was trying to drive past the crossing security gates when it was struck by a train travelling eastbound which had just pulled out of the station and later crashed into another westbound train travelling in the opposite direction. The collision with the westbound train derailed the front two cars of the train, before the vehicle smashed into the concrete platform and burst into flames.

The authority couldn’t identify the three victims in the vehicle as their bodies were severely damaged.

There were around 100 passengers in the eastbound and around 800 passengers in the westbound train. All the passengers on both the trains were evacuated immediately while the injured train passengers, who endured non-fatal minor injuries, were rushed to nearby hospitals, said the governor’s office.

Notably, this isn’t the only deadly LIRR train incident to have taken place on Tuesday. A man died when he was hit by a westbound train travelling between Baldwin and Freeport during the afternoon hours.

At Newz Wave, Linda Lieberman creates news pieces for the latest happenings in the US. She is a proficient journalist and editor who holds a reputable portfolio with proficiency in content analysis and research. In short, she is the backbone of this project.
Previous An outbreak of mumps has been reported in the McHenry County
Next A disabled service dog’s tail amputated after an alleged pet groomer attack