Breaking News
Home / Sports / Faitelson is right, Oribe has no shame or respect for Chivas 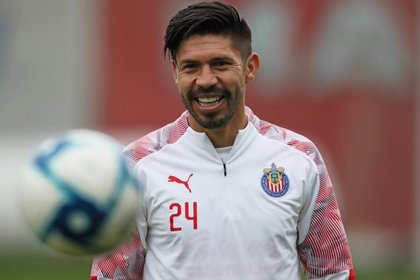 Faitelson is right, Oribe has no shame or respect for Chivas

This post has been brought you by laroja-deportesonline.com The best online site to watch Live Soccer Matches

The Águilas del América won the National Classic against Chivas del Guadalajara with a solo goal from Giovani Dos Santos at the Azteca Stadium. A defeat that struck a chord in the pride of the rojiblanca nation, but not for a footballer who since his arrival has been criticized, both for his azulcrema past and for the performance he has had in the fold: Oribe Peralta.

David Faitelson, a journalist from ESPN , is right: El Cepillo is a scoundrel because instead of leaving with the rest of his teammates after losing the most important duel of the campaign, he stayed to talk and laugh along with his former teammates, an image that without a doubt it hurts and generates impotence to the chiva nation because the striker is one of the highest paid players in the squad and even so he has not made merits to remain in the team, despite being justified by constant injuries, slow pace of gambling and having suffered from COVID-19.

It is true that the rivalry remains on the court, but if you have just lost an important game that is of great weight in the history of the institution and for the fans, you do not stay to laugh, you must have dignity and retire with your teammates, whom you should console for not achieving the desired goal.

To joke and share anecdotes there is another time and another place, better make a phone call or video call, but not like what happened in the Colossus of Santa Úrsula, it was a way of rubbing in the face that you are not interested in the reality that the club is going through , which is shady, and the same goes for Uriel Antuna , who may have mocked Jorge Sánchez several times, but he could never send a good center, and what more can be said about the Beautiful one, two goals since his arrival, one in the Cup and another in the League, in the latter through a penalty, and when he enters it does not cause any difference, Boy, is Faitelson right in calling him a bad hire.

From the beginning his signing was criticized, because in addition to having an Americanist past, several times he messed with the Guadalajara fans, making fun every time he could, without forgetting a clash on social networks with Adolfo Bautista , all these actions have made his name may not be well seen in the Guadalajara team, where it seems that he will continue without regret and if he is the president Amaury Vergara , I should thank him as soon as possible, despite having been one of the most successful Mexican footballers, that is not enough for him to continue being pampered in the Herd, as a clear example is Jesús Molina , who was also in the Coapa group, but with his performances he earned the respect of the Chiva-brothers, unlike the Lagunera legend.

Opinion is divided, as there are those who say that it is not so bad because it is only a sport, because of course, nobody is asking for blood to be spilled or there be blows, but it hits the pride, it was simply possible to withdraw from the field of play just like those who feel the shirt most like Isaác Brizuela , who was even encouraged by Miguel Herrera , but up to there, in addition to Chuy Molina, Hiram Mier , Jesús Sánchez , Miguel Ponce or José Vázquez , who surely went to the dressing room upset and pensive for the bad game that was offered. 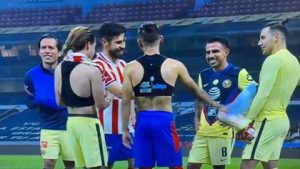 Obviously after the criticism received, the two-time World Cup player excused himself on social networks by saying that it was a way to promote respect and unity, but he can also do that without staying to chat and laugh, simply without asserting anger or anything. , so its publication is unnecessary and to top it all, another one came up alongside Ponce and Oswaldo Alanís when he played for América, implying that it was something that he had already done in the past, although the context was surely not the same Otherwise it would not have caused such a commotion.

Finally, we only have to wait if in the remainder of Guard1anes 2020, Peralta can finally respond to leave behind all these criticisms that he received from a large part of the Mexican press and the Guadalajara fans, because there is still a hard road to enter the phase final of the MX League, missing the commitments against Mazatlán, Xolos, Atlas, Cruz Azul, Pumas and Rayados.

Previous Luis Suárez and Atlético de Madrid, a practically perfect business
Next Neymar could receive up to 10 suspension dates for his fight with Álvaro González