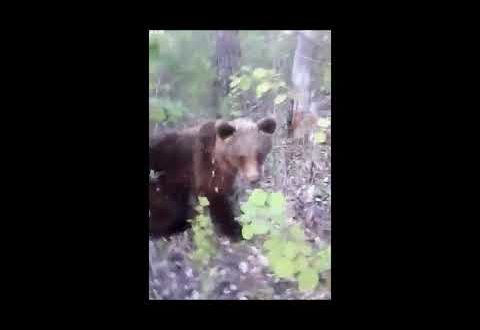 He Provokes A Bear Suffers The Consequence (Insane Video)

A man is filmed pushing a wild bear and it turns on him and bites his hand.

The unscrupulous author of the images disturbed the animal, which was in the forest minding its own business and the man began to chase after it and bother him.

The Russian man, who was filming the event with his own phone while chasing the wild bear and provokes it until the bear attacks him.

The images show how the animal – apparently a young one – was resting peacefully among the vegetation of a forest and, after being disturbed, moves away from the human.

Not content with it, the unscrupulous man gets close to the bear and gives him a kick or a push. The bear seems to be baffled for a moment, but then growls and thrashes himself at his attacker.

“He bit through my hand, damn it!” exclaims the voice behind the camera. At the moment, the date and place of the filming is not clear, nor the intentions of the protagonist.

According to some users, the incident occurred in Kamchatka, although from the wildlife protection service they said it could have happened in the Magadan region, as well as in Yakutia or the island of Sakhalin,  local media reported.