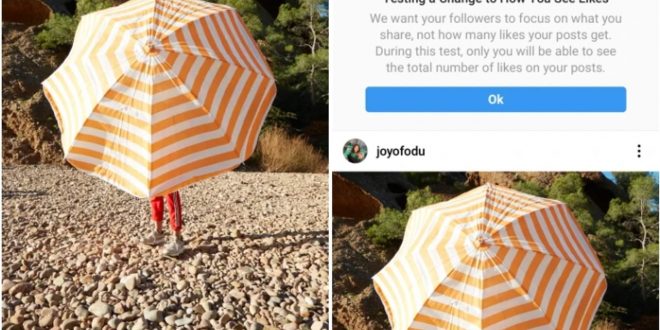 Facebook owned photo and video sharing platform, Instagram announced that it will begin running a hiding ‘likes’ test this week in an attempt to make the environment less pressurized on the application.

The test, which will be initiated in Canada later this week, will hide the number of likes a post receives. The ‘likes’ option, which appears as ‘hearts’ icon on the application will be withdrawn from the permalink pages, main feed as well as profiles, said Adam Mosseri, head of Instagram during the annual developer conference of Facebook, F8 held in California.

While the users will able to see who all liked their post, they will not be able to see the total number of likes another user’s post is getting unless they count them manually, said Mosseri.

According to Mosseri, the aim of the test is to make people enjoy their time connecting with other people they are concerned about on Instagram and not just worry about the number of likes they are receiving.

The hidden public likes test announcement comes at a time when Instagram revealed its plan of expanding its effort to curb online bullying, an issue which affects several users of the app.

Well, one will have to wait for a wider rollout of the hidden like count feature to see the reactions of the users worldwide towards it.

From television to the internet platform, Jonathan switched his journey in digital media with Newz Wave. He served as a journalist for popular news channels and currently contributes his experience for Newz Wave by writing about the tech domain.
Previous Immigrant Teen Dies While In Federal Custody In South Texas
Next Apple begins pre-orders for Beats Powerbeats Pro in U.S. and Canada