Vasily Kamotsky was, until now, the undisputed king of slapping contests.

He had won each and every one of the rivals he had faced, getting a halo of respect among those who practice this particular sport.

But the winning streak of this Russian farmer had to come to an end someday.

And that day has arrived. Vyacheslav Zezulya, another Russian even more bulky than Kamotsky, faced the champion in the final of the last slapping contest.

Kamotsky struck first with his usual forcefulness, but was not able to knock down his enemy as he used to do on other occasions. So he prepared to receive the slap…and he fell!

Zezulya, a giant with a hand the size of a pan, hit full on the face of Kamotsky, who fell forward and had to be held by his helpers to avoid falling to the ground.

The champion had fallen for the first time and Vyacheslav Zezulya became the new king of the slapping contests getting a double prize: the 675 euros of the winner and the prestige of having knocked down the invincible man until now.

Speaking to Goalsn, Kamotsky says he “hit me a good smack and I liked it. He put me to sleep a little. I think I could have followed, but they grabbed me and got me out of there.”

Now, Kamotsky already thinks about regaining his throne because he is convinced he can knock out the new champion: “I only hit him with 25 percent of my strength.”

Vasily Kamotsky has become one of the most famous social media characters in recent months, after the videos of his slaps have gone viral.

In one of his last appearances, he knocked down a well-known YouTuber who had challenged him through the internet.

Watch the videos below: 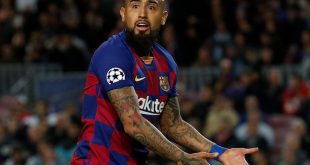