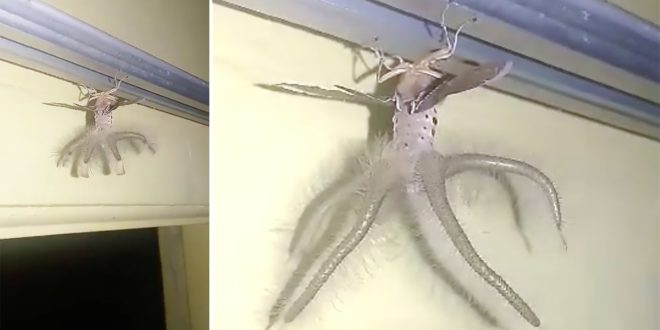 Man Has An Unusual Alien-Like Creature Enter His Home … I. Am. Done! (TERRIFYING VIDEO)

He captures an unusual creature with wings and tentacles that ‘broke in’ in his house.

The insect, which has two wings and four large tentacles, could be a lepidopteran of the subfamily of the arctinos.

A strange alien-like creature recorded in a house in Bali (Indonesia) is causing a stupor on the Web.

In the images, taken by the owner of the house, called Hari Toae, you can see a large insect, with two wings and four tentacles, hanging from the ceiling.

The man said that the animal seemed to have entered the house taking shelter from the rain that was falling that night in the area.

“I let him stay at my house but just for one night, I do not want him to scare my guests,” he said.

Toae failed to identify the animal, which could be a lepidopteran of the subfamily of the arctinos.

The Sun points out its resemblance to the gangon Creatonotos, a species of moth that extracts its tentacles to emanate pheromones and attract couples.