The Argentine soccer star, Diego Armando Maradona, has denied that he is going through health problems, and revealed that when he dies he will leave nothing in inheritance to his children.

Maradona’s statements come after Gianinna, one of the two daughters of her first marriage, posted a series of messages in Instagram stories that reflected her concerns about her father’s health status.

“I don’t know what Gianinna would have wanted to say,” Maradona said in a video released Tuesday on her YouTube channel.

“As one gets older  they care more about what you leave, than what you are doing,” and “I tell everyone that I am not going to leave anything to them, that I am going to donate everything,” added ‘El Pelusa’.

The former soccer player reiterated that he is “very healthy” and that he is not “dying at all.”

Last week, Gianinna on his Instagram account hinted that his father is “stuffed” in order to control him.

“He is not dying because his body decides, if they are killing him inside without him noticing. I do not believe in the normal parameter, but that is very far from the reality he deserves. Pray for him, for please,” said one of Maradona‘s daughter’s publications and set off the alarms. 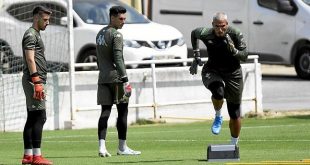