Former American boxer Mike Tyson commented on his fight against Evander Holyfield, which took place in June 1997, and which ended with the disqualification of Tyson, after he bit his rival’s ear.

When asked by famous sportscaster Jim Gray during a show aired last weekend if he would do it again, Tyson said “I hope not.”

“I say, ‘No, never again.’ But I could do it again. Well, if he did what he was doing to get bitten, I would bite him again,” said the former champion.

Next, Gray asked Tyson about the second bite, to which Tyson replied that “I bit [Holyfield] because I wanted to kill him.”

“I was really mad because my head got hit and all that. In fact, I lost consciousness from the whole match. It took me out of my match plan,” he recalled.

In the third round of the June 28, 1997 fight, Tyson bit off a part of Holyfield’s right ear. The fight was suspended for a few minutes, and then resumed. However, moments later Tyson bit his left ear and this time he was disqualified.

Watch the famous moment in the video below: 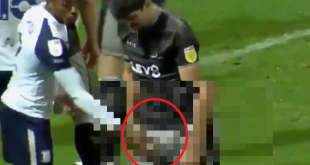