This strange creature was baptized as it is very intelligent and without having a brain, you can read the impressive unusual case and we will show you images.

The zoo in Paris has opened a new exhibition where it shows the public since last Saturday to “blob“.

At first glance, the fascinating yellowish creature looks like a fungus, although it acts like an animal.

Bruno David is the director of the Natural History Museum and on the opening day he said:

“The blob is a living being that belongs to one of nature’s mysteries. It surprises us because it has no brain but is capable of learning … and if you merge two blobs, the one you have taught will transmit your knowledge to the other.”

“We know for sure that it’s not a plant, but we don’t really know if it’s an animal or a fungus. It behaves very surprisingly for something that looks like a fungus … although it has the behavior of an animal, it’s capable of learning.”

The Paris zoo explains that the creature:

“It has no mouth, stomach or eyes, but it can detect food and digest it.” It also details that “it has 720 sexes, can move without legs or wings and heals in two minutes if cut in half.”

Unfortunately, and although it has taken the name of Steve McQueen’s 1958 B-series horror film, The blob is not as strange a creature as it seems. It is a mucilaginous mold “mold of many heads.”

This yellowish creature feeds on fungal spores, bacteria and other microbes.

The fascinating faculties of Physarum polycephalum is its ability to feel and adapt quickly to its surroundings, a behavior that we could, in the absence of a more accurate word, call learning.

Recent studies have shown that they are able to absorb harmful materials and use them as a kind of memory system, helping them determine if they should avoid contact with them in the future.

They can even transmit this knowledge to others when they merge.

For all these reasons, we can understand that the zoo in Paris has exaggerated slightly by renaming it as The Blob, since it is undoubtedly one of the most fascinating creatures for science. Previous Vox Supporter Burns his Barça Shirts: “A Shitty Independence Burns”
Next “No Force Can Stop the Reunification of Taiwan and China” 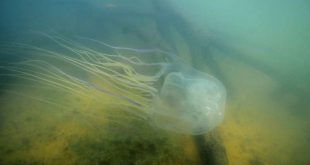