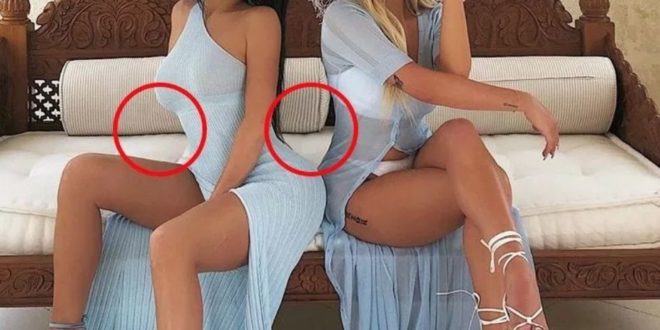 Kylie Jenner has been accused by citizens of having STILL photoshoped her famous curves in new sexy vacation photos on Instagram.

Fans say that the businesswoman dramatically changes the vast majority of her shots. It is this comment that has aroused suspicions:

“It’s funny how their body looks exactly the same, you know what that means.”

The photo in question is this one where we see Kylie and Anastasia Karanikolaou, her best friend, with similar curves and in the same places. In addition, the pavé tiles in the background have been moved to give the impression that the damsels’ arms are thinner. Also, in a second photo, we can notice the cylindrical cushions behind Kylie that were “curved” which suggests that she edited her pictures. One can clearly identify the shade between the vertical lines on each side of the pillow.

Some Internet users did not hesitate to offer advice to the influencer not to make the same mistake. “The next time you use your photos on Photoshop, make sure you’re not sitting in front of a striped pillow;),” wrote a fan.

Also, see this photo that shows a Kylie Jenner with excessively large hips, a little too much for reality… And this last cliché is the clan. However, Anastasia’s dress is not fluid with her leg. As if we had a little too small his thigh…

And for the end, the most obvious of the changes, observe this photo; more precisely the leg of Anastasia certainly too small for his body.